✮ ✮ ✮ HOT 99¢ SALE ALERT! ✮ ✮ ✮
"Childhood friends-to-lovers romances are my jam and A.S. Teague knocks it out of the park with When You Became Mine. I loved it!" - Amie Knight, author of The Stars Duet
When You Became Mine, an emotional friends-to-lovers romance from A.S. Teague, is ON SALE now for only 99¢!
Don’t miss out! Grab your copy today!
Amazon: https://amzn.to/2NTwFG7
Amazon Worldwide: http://mybook.to/WhenYouBecameMine
I was twelve years old when I fell in love with Piper Kelley. Even at the age of eight, she was everything I wasn’t: brave, bold, and beautiful.
The night of my college graduation party, I finally made my move, but Piper only had eyes for one man—my younger brother.
With a battered heart, I left for Vegas, determined to put her behind me. But eight years later, fate proved once again that it had never cared about my plans.
Now, I’m back home, and determined not to fall into the same trap I spent the majority of my adolescence trying to escape.
But when Piper finds herself at the risk of losing her medical license, I realize just how far I’m willing to go to protect her.
I was twelve when Piper Kelley became mine.
It’s time I let her know. 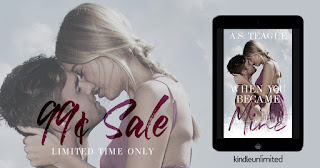