So this is another one of the amazing banana bread recipes that I tired. This one is for all of you people out there that just want a plain banana bread without all of the extra goodies.

This recipe is simple and straightforward and once again I just used three bananas instead of the exact 1.5 cups so not sure of that would really change anything or not.

I think next time I might even add in a little more cinnamon just because I really love the cinnamon and banana combo.

This recipe is really good and I love the different combos that this website has with banana bread!

You can find the recipe here: https://www.twopeasandtheirpod.com/banana-bread/ 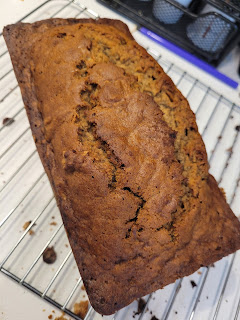 This was a recipe I was excited to make but when it came down to the day I was going to have it I had to improvise due to being short on time and unable to make the dough from scratch.

I had a Pillsbury pizza crust in my fridge so I molded it into the cast iron pan with a little bit of difficulty of stretching and filling in the holes.

So I will admit that this one would have not tasted as good as what was originally on the website.

I used a Classico pizza sauce which I really enjoy. I was surprised at laying down pieces of mozzarella on top of the sauce but I really liked how it turned out. I then threw on grated mozzarella, pepperoni and then the parmesan. I loved the parmesan on top and I will do this with more homemade pizzas in the future!

Overall it was a great pizza night and I can't wait to try again with more time!

You can find the recipe here: https://thefoodcharlatan.com/pan-pizza-recipe/ 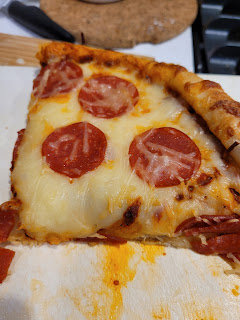 I seem to be working every weekend and generally in the morning so I seem to never be able to make the kids pancakes so I decided to make them for dinner one night.

These ones looked really good and different but once again used ricotta cheese so I was excited!

I love the orange and chocolate together as they were refreshing and fun!

I followed the directions but may have thrown a few more chocolate chips in than necessary. They were very chocolatey but still super good!

Now the pancakes got a little bit well done as I couldn't find the cord to plug in my pancake grill and instead used my non-stick pan that I had just cooked sausages in.

You can find the recipe here: https://snappygourmet.com/cannoli-pancakes/ 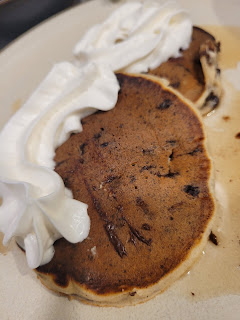 One thing I seem to rarely make is appies! If we are headed out to a friend's I may make some but I find I generally end up buying something and not making stuff from scratch.

We decided to have a relaxing Friday night with some appies and watch some TV which we generally seem to never do as a family.

The recipes that I chose were a Baked Brie and Jam Pull Apart Bread and Dorito Chicken Bites.

The recipe for the bread was super easy to follow and I used a cherry jam that I had from a previous recipe. I do think that I needed to cook the bread longer as not all of the cheese was melted enough. I think it was my foil wrapping job.

The second recipe was for Dorito Chicken Bites. This is something that really could be made with full-size chicken as well as the recipe is super easy to follow and the chicken tastes really good. I love that you could totally change it up with different flavors of Doritos! We used the regular nacho cheese ones and then added some sweet Chili Heat ones when we needed a few more.

The Chicken Bites are a little time consuming but worth it!

Both of these recipes are super easy to follow and great for a nice night in!

You can find the recipes here: 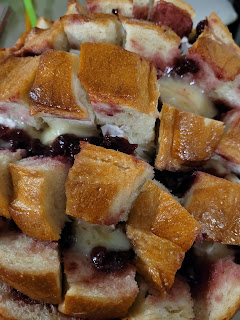 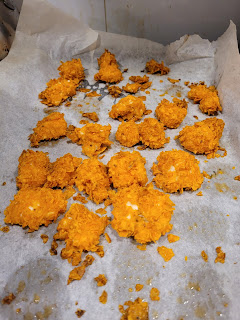 Continuing on with my exploration of different banana breads this was one I was excited to try with my love of peanut butter!

This bread is a little more dense with the addition of peanut butter and it is a heavier loaf.

I followed all of the instructions but once again I just used 3 bananas and didn't actually measure out the exact proportions so this may change the recipe a little bit.

I found this one great and I think it would be even better with some chocolate chips sprinkled on top although it may add a couple of more calories! It would totally be worth it though!

You can find the recipe here: https://www.twopeasandtheirpod.com/peanut-butter-banana-bread/ 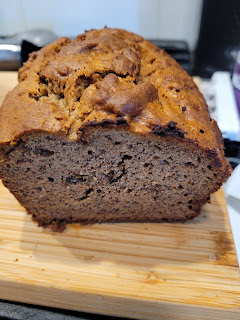 I had this on the menu but when it came time to make it we were in an absolute downpour and there was no way any of us were going to go outside and BBQ the chicken. So I made some changes and totally winged it.

I love the bourbon taste so as soon as I saw bacon and bourbon I knew that it had to be made. I made the BBQ sauce but I didn't add in the raw bacon as I was honestly confused on whether I was supposed to add raw bacon or cook it ahead of the time for the sauce. It never said so I decided to skip that and therefore I just made it in a bowl and didn't use a blender.

For the chicken and bacon - I diced both of them up and threw them in a pan to cook. I didn't add an oil as I knew that the bacon would create enough juice to cook everything in. When I could see that everything was pretty much cooked I threw in the BBQ sauce and mixed it all up and let it cook longer.

With the potatoes you have to read the recipe ahead of time as the potatoes need to bake for an hour before you even get started. I threw them in the oven way before I planned to eat dinner. I followed the ground beef directions as directed and everything was super easy. When the potatoes were done I scooped out the middle which does take awhile. Then mixed everything back up with the milk and then stuffed the potatoes. We threw on some cheese and got them back in the oven.

Both the chicken and the potatoes turned out great and it was a very filling meal! The chicken didn't look beautiful but it definitely tasted great!

You can find the chicken here: http://www.hormelfoodsrecipes.com/recipes/details/8030/bacon-bourbon-barbeque-chicken-kebabs.aspx 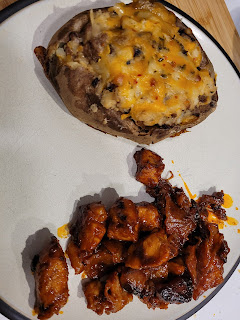 I've been on a little bit of a Mexican kick lately and trying to get it in the schedule once a week. I've been trying new recipes and this one jumped out at me for the simple reason that it said easy.

I love quick and easy and this one was super easy to make and didn't take me much time at all to get everything together.

At the time of writing this recipe up I have found myself just overwhelmed and trying to rebalance. I'm trying to focus more on one step at a time and doing more things that I enjoy when I am not at work. I am trying to clean and get stuff done but I am mixing in more baking and cooking again. I find I really find happiness in that and so I still am constantly writing lists of what needs to be done but not getting overwhelmed by every little thing. Plus the weather has been horrible lately with constant rain and gloom so I am finding that happiness.

This recipe was so easy to follow and I had it made so fast. The sauce on top was awesome and these were seriously absolutely devoured when they came out of the oven. There were no leftovers and I was excited that I was going to have some!!

I recommend this recipe so much and you can find it here: https://cookiesandcups.com/sour-cream-chicken-enchiladas/ 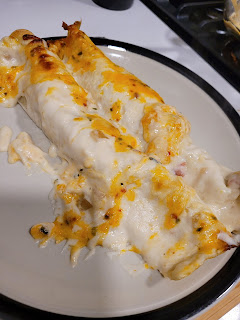